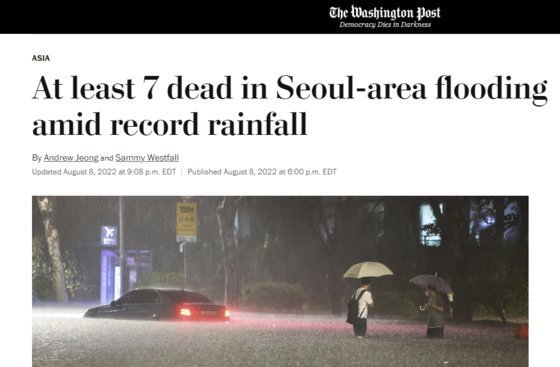 AFP paid attention to flooding in the Gangnam area. The media introduces Gangnam as a “luxury and affluent area in southern Seoul” featured in Psy’s 2012 K-pop hit ‘Gangnam Style’, saying, “People crossed waist-deep water and subway stations flooded, while cars were almost empty. It was submerged in water.” Citing an office worker in Gangnam, he added, “It is ironic that Gangnam, which has developed well as the center of the economy, is so vulnerable to natural disasters.”

The BBC reported on the news of two sisters in their 40s and a 13-year-old child who died in the flooded building, saying, “I was living in the apartment ‘banjiha’, located down the street that became famous in the Oscar-winning Korean movie ‘Parasite’.” explained.

Foreign media worried that record heavy rain would continue due to extreme weather. According to Reuters, “there is more rain forecast until the 10th in central regions such as Seoul,” and “precipitation is rapidly increasing and torrential rains are occurring more frequently as summers are prolonged due to climate change.”

The WP also said, “This kind of heavy rain is happening all over the world due to climate change.” “The warmer atmosphere holds more moisture and can generate more rainfall.”

1. I observed on the news that they were residing in a basement, not even a half-basement; may they rest in peace.

2. Stop renting out basements as residences, please. They are unfit for habitation by people.

3. This is so annoying. To think they had to end their life in a basement while residing in such a developed society.

4. They had a disability and received welfare. They were residing in a basement, but why? Where did all the housing for rent for folks like them go? Why are so many people living in large flats and driving expensive vehicles? Instead of providing discounts for married couples, shouldn’t we prioritize housing for the poor and disabled?

5. Please be born as Lee Jae Yong’s child in your next life; it breaks my heart to know that they had a disabled daughter.