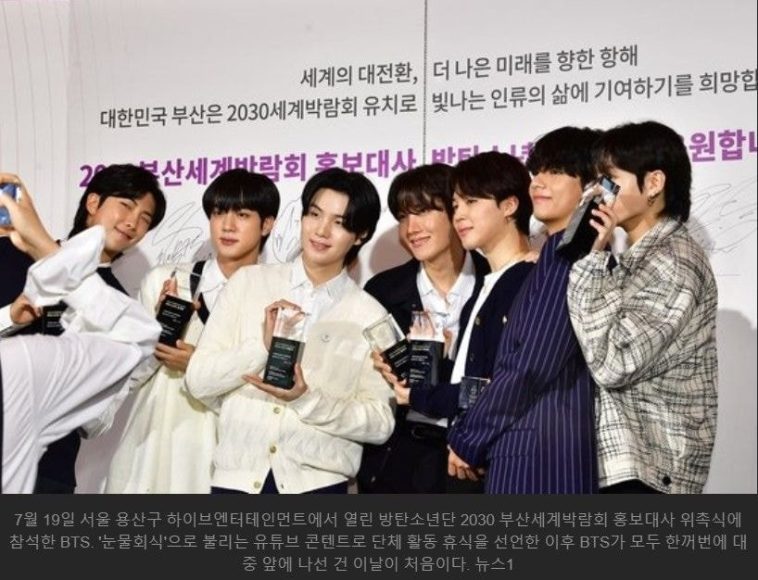 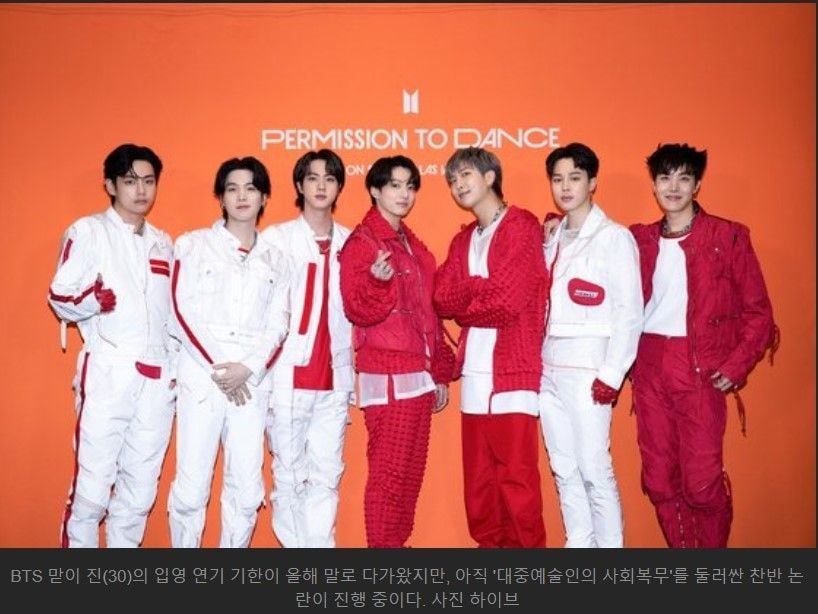 Will BTS go to the army as an active duty soldier?
Although the controversy over the military service issue of BTS, which is recognized as a global star, has been going on for several years, the answer to this question is still uncertain. Politicians and the competent ministries such as the Ministry of National Defense, the Military Manpower Administration, and the Ministry of Culture, Sports and Tourism are pouring out many words and suggestions, but nothing has been decided. Jin (30), the eldest of BTS, has to enter the Nonsan Training Center after 113 days at the latest, as this is the last year he can postpone his enlistment. We examined the issues surrounding the BTS military service issue.
① 30-year-old Jin, will you enlist in the military this year? Postponing enlistment until the age of 33?
According to the current military service law, Jin, who was born on December 4, 1992, must enlist within this year when he turns 30. Until now, according to the Military Service Act amended in November 2020, military conscription and convocation have been postponed as ‘Excellent in the field of popular culture and arts’ (2018 Hwagwan Cultural Medal). Before that, he had been acting while he was delaying his enlistment to go to graduate school.
The variable is the amendment to the Military Service Act proposed by 10 people including Rep. Lee Yong-ho of People’s Strength on the 31st of last month. It is a plan to increase the age limit for deferring military service to the age of 33, but if this amendment is passed, Jin will have three more years of time. However, as the National Assembly Defense Committee review process has not yet started, it is unclear whether the review and plenary session will be possible in the second half of the National Assembly, which started on the 1st. Last year alone, a bill to amend the Military Service Act to incorporate pop culture artists into ‘arts and sports personnel’ was proposed three times in June, August and October.
②If BTS goes to the military, can I still watch their performances? 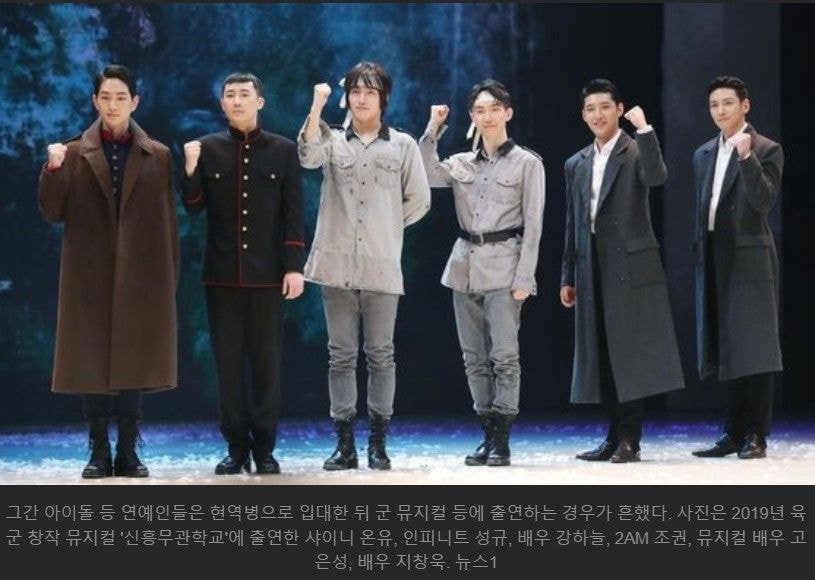 On the 1st, Minister of National Defense Lee Jong-seop said in a work report to the National Assembly, “I think that (BTS) can come to the military but give them time to practice and perform abroad.” There was also an expectation that ‘will it be? However, considering the context of the Minister’s remarks, this is not necessarily the case.

Minister Lee said, “As a result of the review by the Ministry of Defense, we can allow them to continue performing in the national interest and to the extent that they do not disturb principled issues such as fairness and equity and reduction of military service resources.” If there is a performance schedule, I think there is a way to let them go abroad and perform together.” He said, “Since many people highly value their service in the military, it could be helpful to their popularity. will,” he added. In terms of the context of the entire statement, it is close to the content that ‘under the premise of serving in the military, if there is a performance in the national interest, measures can be taken’. The Ministry of National Defense also said, “It was a general explanation that if you apply for the selection of military band members or creative musicals in the military, you can participate in events, etc.” was ambiguous

After all, if BTS enlists in the military, the only way civilians can see BTS is to see them act as military musical actors or military band members at national events. As with other idol groups, it is impossible for members of the military status to participate in performances by members who have not enlisted.
③ What about public opinion polls? Results vary depending on the research institute and the question
The most controversial part about the BTS military service issue is whether ‘is it subject to social service like art or sports personnel?’, so-called ‘military service exception’. People who have achieved great achievements in the arts and sports are transferred to social service personnel, not active duty soldiers, and perform military service in places other than military units. However, as BTS received several awards at global awards ceremonies, the argument that ‘popular artists should also be classified as art and sports personnel if they achieve great achievements’ grew, sparking controversy.
In the National Assembly, regardless of the opposition, there was a saying, ‘Let’s do a poll to reach a social consensus on the issue of BTS’ military service.’ At the National Assembly Defense Committee plenary meeting on the 31st of last month, Minister of National Defense Lee Jong-seop said, “I told you to set a deadline and draw a conclusion, and to promptly conduct the poll.” ”, but later explained through data, “The remarks of ‘instructing public opinion polls’ are not meant to promptly conduct an opinion poll, but rather to review the necessity and relevant details.”
The results of the polls differed depending on the institution and the question asked. On the 7th, in a survey conducted by Cho Won C&I, a polling company specializing in opinion polls (September 4, targeting 1001 people), 54.1% answered that ‘BTS should fulfill their military service obligations’, and ‘special benefits should be given to military service’ on the 7th. ‘ was 40.1% of the responses. On the other hand, in a survey conducted by Real Meter, a polling company on the 8th, commissioned by the Internet Media Media Tribune (September 3-6, for 2,000 people), 67.5% of respondents answered “agree” to the question of whether they would agree to “transition to BTS’s alternative service”. , ‘disagree’ was 31.3%. 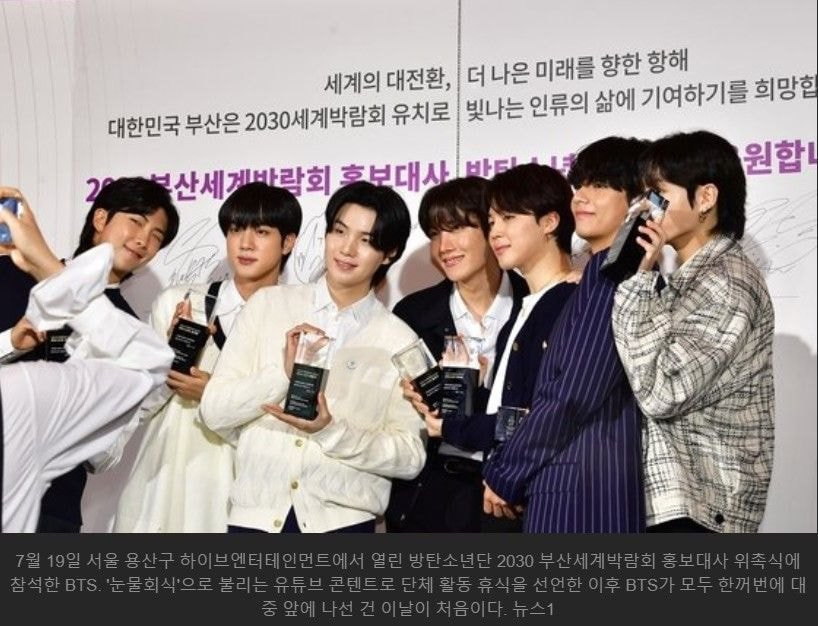 BTS , who are currently performing solo activities, are scheduled to perform their first team concert in 6 months at the Busan Asiad Main Stadium on the 15th of next month . This is a free performance to support Busan, which is running to host the 2030 Expo. With 50,000 seats, live play at Busan Port, and online streaming around the world, it also aimed to promote overseas promotion. Busan, which is competing with Rome in Italy, Riyadh in Saudi Arabia, and Odessa in Ukraine, is preparing for an on-site inspection early next year and a final venue decision at the end of next year. Busan City, which signed an MOU with BTS ‘ agency in June , announced BTS as a public relations ambassador, and announced that it would carry out publicity activities in the field of due diligence early next year and the final PT at the end of next year. After announcing the news of BTS ‘ concert to bid for the Busan Expo, Busan Mayor Park Hyung-joon said, “I suggested BTS ‘s alternative service to the President’s office for public relations, etc.” However, the Ministry of National Defense explained, “Even within the current military system, it is possible to permit overseas activities of ordinary soldiers to promote national interests.”

Everyone, including the Ministry of National Defense, is reluctant to comment directly on the issue of military service, which is the most sensitive issue in a country where military service is mandatory for all adult men. In the case of the Ministry of Culture, Sports and Tourism, former Minister Hwang Hee said in his retirement speech in May, “It may be unfair that cultural artists are already given special military service, but pop culture artists are not given opportunities. ” However, at present, “the issue of military service is a sacred duty, BTS has promoted Korea’s K-culture worldwide and has overwhelmingly elevated the Korean brand, and we need to think about the issue of equity between the basic art field and popular art.” You’re just repeating the basics. There is no official plan to collect opinions or polls on equity between the basic art world and the popular art world.

Hive, the BTS agency, is also watching the progress of the discussion, saying, “There is no change from the position when they appealed for ‘resolving uncertainty’ (of military service issue) in April.” The Ministry of National Defense, holding the key, said, “ In

1. Why are they like that… just how old are they already…

2. But celebrities always push their enlistment date as far as they can. Reading articles like these just piss me off
3. They are not even my bias but I’m so fed up of this talk. Telling other idols to enlist faster when they have 1 year or 190 days left or asking them why they aren’t enlisting yet.. Will you have it better if they enlist? O’m so tired

4. Just enlist already. I’m so tired of this

5. I looked him up and he’s turning 31 this year? If he thinks about his own stamina and strength, he should enlist at the latest in his early 30’s. The training programs are made for kids in their early 20’s…

6. Their company can’t let go of their greed and is just making Bangtan receive unnecessary hate..
7. I was wondering when he will be serving and seems like there are still a lot of days left. If only one of them would enlist, it would become more quiet

8. They will all enlist so who cares?

9. Celebrities do get to enlist at a more comfortable time than commoners
10. Of course they will enlist when the time comes. What’s the point of articles like these? 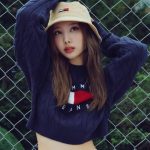 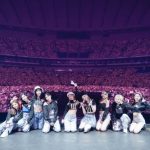