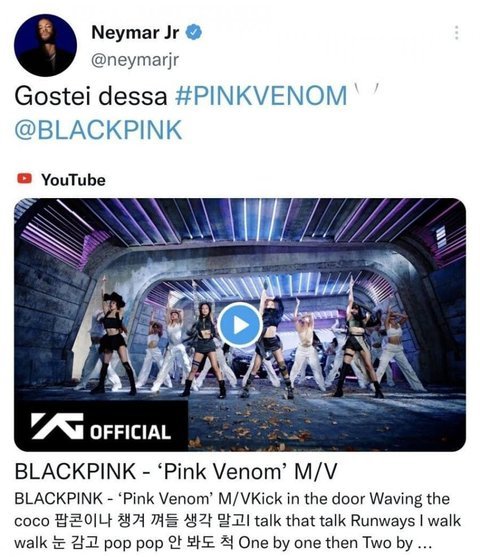 When I wore the BLACKPINK bag on the bag, I thought she was pretty, but I must have been a
steamed fan..

1. Neymar is also an idiot hahahahaha

2. Did Neymar do it for money?

3. If I ask Neymar, whose annual salary is over 50 billion won, to promote Blackpink, will he do it haha How many billions do you think YG will give you?

4. This time, Tottenham: Seville, you played in Korea. There, the Seville players and coaches asked where you could see Black Pink. It’s more popular than you think

5. Neymar who doesn’t even know the word of football, live the present life

6. Neymar is from Brazil. I heard that Blackpink is popular in South America

7. Neymar, who has already made the top spot in Europe and earned over 1 billion won a week and 52 billion won in annual salary, gave lip service to Korean fans.

8. Is Neymar from South America?

9. Who is that uncle who has over 100 million followers?

10. There are a lot of kids who don’t know who Neymar is. Most of the girls aren’t interested in soccer, so he’s a really famous soccer player.