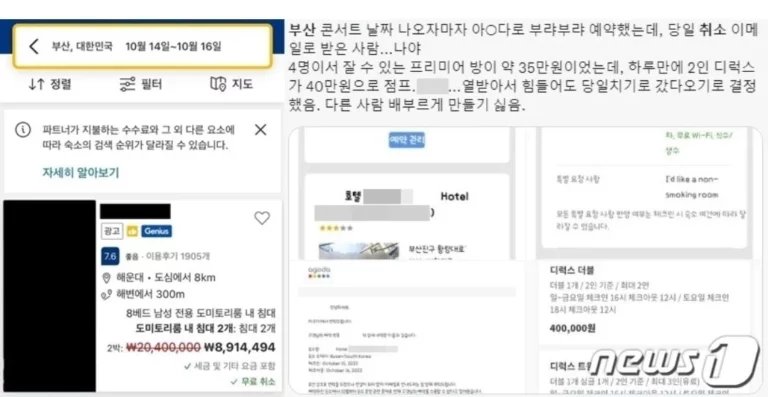 Accommodation establishments in Busan one after another notifying cancellations of reservations and raising prices unreasonably, etc., are causing controversy.

On October 15th, BTS will hold a concert ‘BTS in BUSAN’ to pray for the bid to host the 2030 Busan World Expo.

This performance, held at the special stage in Ilgwang, Gijang-gun, Busan, will be held for 100,000 people, and a live play with 10,000 people will be held in the outdoor parking lot of Busan Port International Passenger Terminal.

As soon as the news was announced, reservations for major accommodations in Haeundae, including Gijang-gun, were quickly closed.

On social media such as Twitter and various online communities, there were reports of cancellations and unreasonable prices on accommodation reservation sites.

One netizen said, “I had my accommodation canceled, but when I asked the company, they said it was ‘personal circumstances’.” Another netizen expressed concern, saying, “Yesterday and today, three accommodations I booked were canceled.”

In fact, on the hotel reservation site on October 15, the daily accommodation cost soared from a low of 1 million won to 3 million won.

In this regard, the city of Busan said that it is considering a plan to jointly conduct inspections with districts and counties, and that it will ask related organizations to cooperate in price stabilization through a meeting.

1. There are so many problems with BTS this time, we have to change the location first. The vicious things in Busan hotels are still ongoing, and everything seems to be going crazy one by one.

2. Even though it’s not really old-fashioned, Busan tourism is a huge boon for the National Foundation Day holiday in early October, the Busan International Yanghwa Festival, and the Busan Rock Ferrang Biennale. It’s the first fall after all domestic travel is over after Corona; I have no conscience really;

3. What is the reason for hosting the Expo… 100,000 people who will never come to Busan again + If it’s Busan, you are training a lot of ARMYs who have come up out of frustration? I want to start a campaign against the bid for the Busan Expo.

4. I think it would be cheaper to book a hotel in another area because the fans who go there rent a bus.

5. Fact, the singer stands on stage without even paying for a ticket, but who will be criticized if there is an accident due to safety issues in such an unresponsive situation… ☞744 If you don’t know, don’t say anything. What kind of bulletproof is this, but you know that Busan City is in a bad mood. It is close to a local government event planned and promoted by the city of Busan, and the main purpose of the event itself is the origin of the Expo. BTS is an ambassador for the Busan Expo, so it’s a free performance

7. Disgrace to the country..

8. Absolute idiots are playing a game. Apart from raising the price of accommodation, canceling the accommodation that has already been booked is a complete pushback.

9. It would cost less money to get a lodging in a nearby area other than Busan and take a taxi;

10. I wish I could just beat them all haha The dorm bastards and the dorms aren’t even prepared, but the city of Busan, which is forcibly dragging them along.