It’s been like this for weeks now. Bangtan, Seventeen and TXT are all on hiatus or doing concerts overseas so it’s legendary 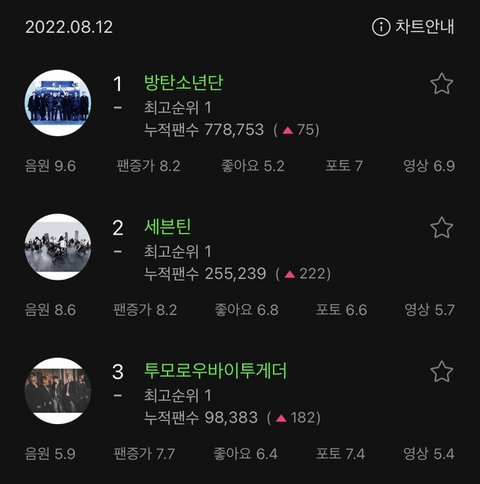 2. Tubatu has been increasing by 100╋n since the fifteenth night, before it came out, people were asking why are they doing this here and there and the reaction was not good, but as expected, if you do anything well, it’s the best.

3. Take good care of the stones before the rookie bet to Hybe

4. SEVENTEEN has a lot of rice cakes in comparison to their age and other peers who are in a similar position, so there seems to be a steady influx. I think it’s about time I play hard when I’m playing, I’m really strict when I’m practicing, so it’s the first time I’ve ever thought that I should live a hard life while watching idols.

5. These days, someone other than an employee captures it like that and uploads it hahaha

6. SEVENTEEN TUBATOO seems to have come out really well at fifteenth hahahahahahaha

7. All three songs seem to be delicious! The title is trendy and challenging, or as soon as you hear it for the first time, it is a song that you want to feel titled.

8. Even though BTS already has 770,000, it’s surprising that the inflow continues to be steady haha.

9. But teenage girls like SM idols. The most popular boy idol among middle and high school girls right now is Suju NCT.

10. I’m not very interested in the male dolphins, but when I watched it at fifteen before, I felt like Seventeen was left behind, so I thought it would be fun if I did it from a fan’s point of view. And compared to other male idols, the songs are also good, so I’m listening to some of the title song