Concerns specifically grew about Jang Wonyoung’s performance on IVE’s MCountdown “After LIKE” stage, which was recently made available on Mnet’s official YouTube page.

In the video, Jang Wonyoung can be seen dancing with a double ponytail, but because of her thin frame, viewers can also see her ribs. 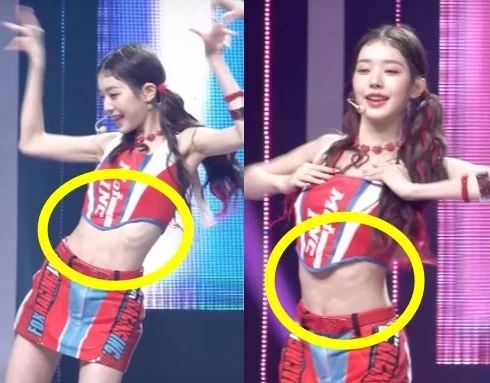 Internet users from other countries expressed their worries about Jang Wonyoung’s health in the comments section, saying things like, “I’m worried about her because she’s so skinny,” “I know she wants to look perfect, but seeing her like this makes me feel so guilty,” “Health should come first,” and “I hope she doesn’t put pressure on herself to stay thin.”

Many admirers also cited Jang Wonyoung’s earlier comment on her physical appearance, in which the female idol claimed, “People didn’t know how I was managing things. They would claim that I don’t gain weight even when I eat and believe that I have a unique constitution, but everyone would be shocked to see how I take care of my body. This signals a serious scenario to them.

Korean internet users concur about the situation, expressing opinions like, “She’s still a minor, but she already looks like that…”, “It’s strange to hear people praising Wonyoung when she’s starving herself to keep her body skinny,” “Wonyoung, please eat a lot,” and “She has always been skinny, but now it has gotten worse.”

However, Jang Wonyoung’s group, IVE, recently achieved a perfect-all-kill by topping all significant domestic charts, demonstrating their sensation-level popularity. Their third single, “After LIKE,” was released on August 22nd.