Knetizens are discussing about Jang Won-young’s Instagram been hacked, saying Lisa is the next target… 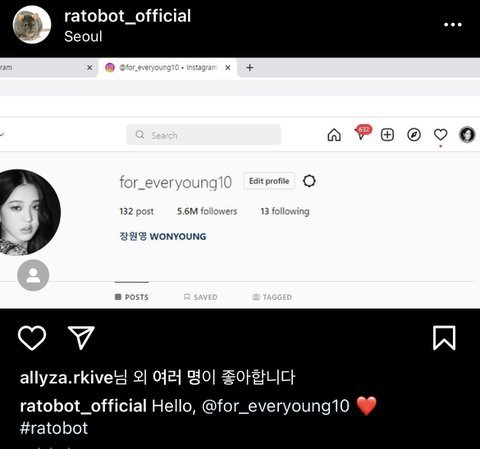 How did they do it…? Seriously, are they really gonna hack into Lisa’s account? They said that she was their next target

1. I think I’d be pissed off if they ruin Wonyoung Jang’s Instagram feed

3. Guys, Jenny V’s article now Top Star News Top star news A runaway reporter broke it. Instead of distributing bulletproof hacking hidden cams in the past, did you know that the reporter who first broke the voyeur’s hidden cams to scare the victims was also Yoo Soo-yeon? You know that all reporters get paid to write articles hahaha Are you really using other celebrities in the media to prevent BTS hacking and dissemination of hidden cams? Voyeur and British man????

4. Even if the number of upvotes goes up a little in the article about BTS being hacked by the general public, the post is deleted completely, but people can’t see it.

5. I think I’ve seen posts like BTS and IU being hacked recently, but these days, it shouldn’t be known that real celebrities are being hacked by the public, so you’re cosplaying as victims while writing in the media that celebrities have been hacked?

6. I found out that victims who were hacked and disseminated by BTS can watch celebrities like ordinary people cctv by installing hacking apps.

7. Lisa why? Are you good at finding hackers?

9. Jang Won-young’s Instagram is fine, but what are you talking about?

10. Is that real??? I saw on Instagram that the hacker was going to hack Wonyoung Jang, V Nayeon, Kai, Lisa… Isn’t this a real crime?