Jin was spotted last week while watching Casper Ruud’s match at the Korea Open 2022 tennis tournament. He arrived unannounced, hid behind a mask and a hat, and left immediately after the match ended. Jin didn’t say anything about it on social media. 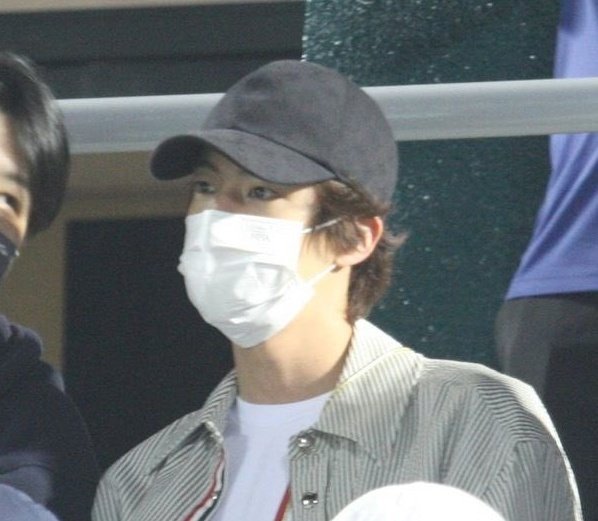 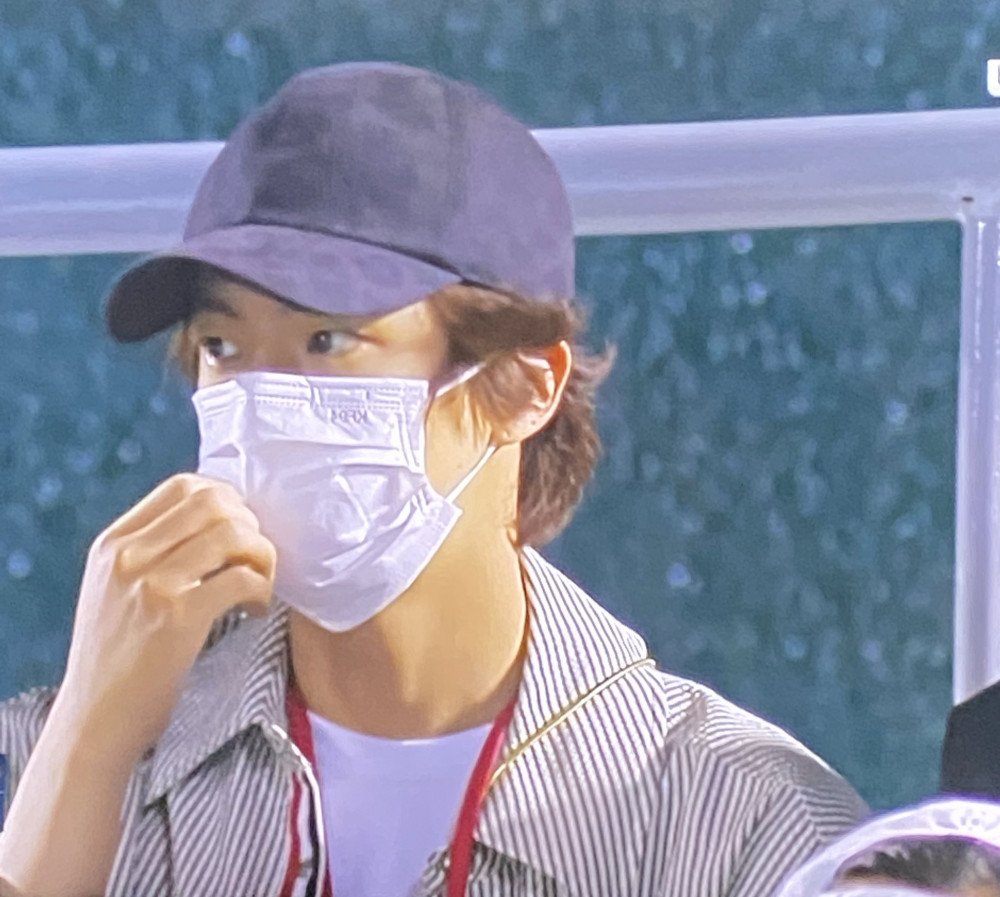 However, his mere presence in the audience sparked outrage on the Internet. In just two hours, over one million people watched a 10-second close-up of the artist. The sports media emphasized how a single video featuring him received 20 times the views of the average tennis-related post. The majority of the major global tennis media outlets ran multiple stories about Jin’s attendance. The match’s commentator kept returning to Jin, who was sitting in the center court, and referred to him as a “Superstar in the stands.” Casper Ruud expressed his pride after the match that an artist like Jin was interested in tennis. Other tennis stars also weighed in on Jin’s visit. And one of them even invited Jin to his upcoming matches! 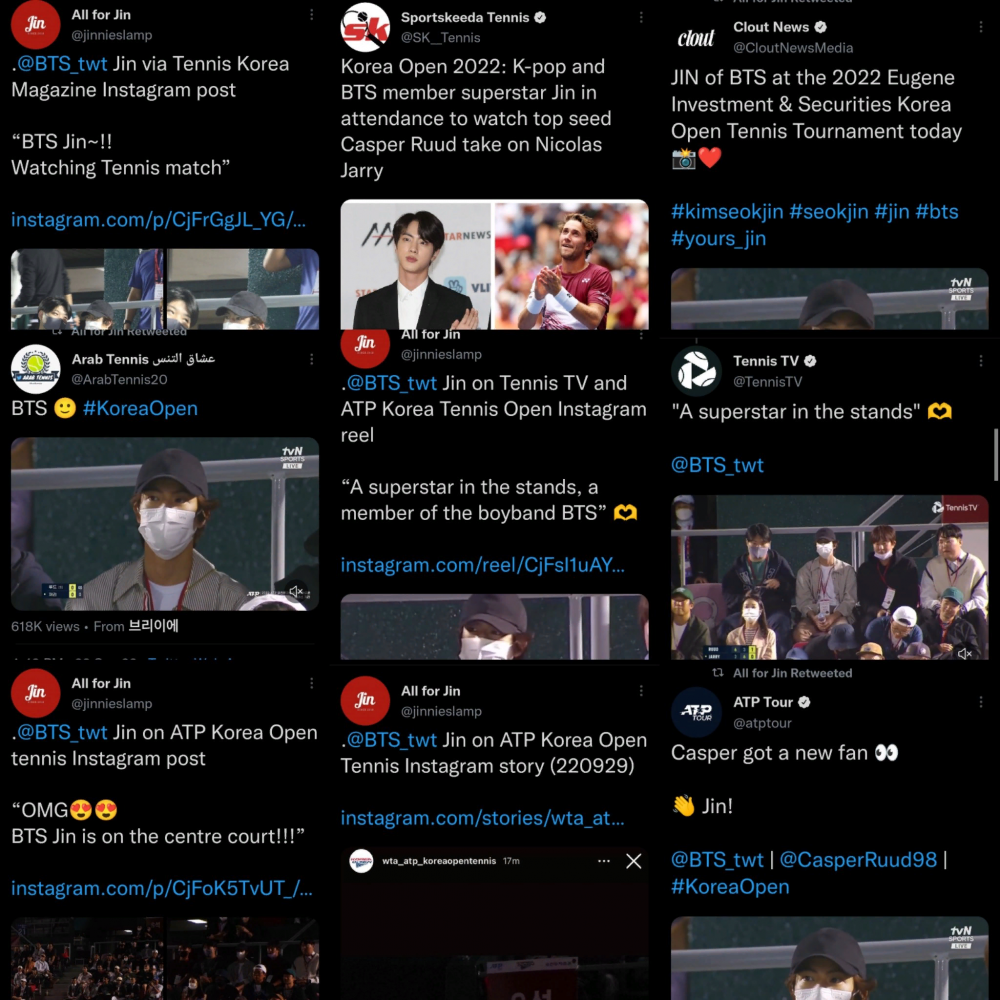 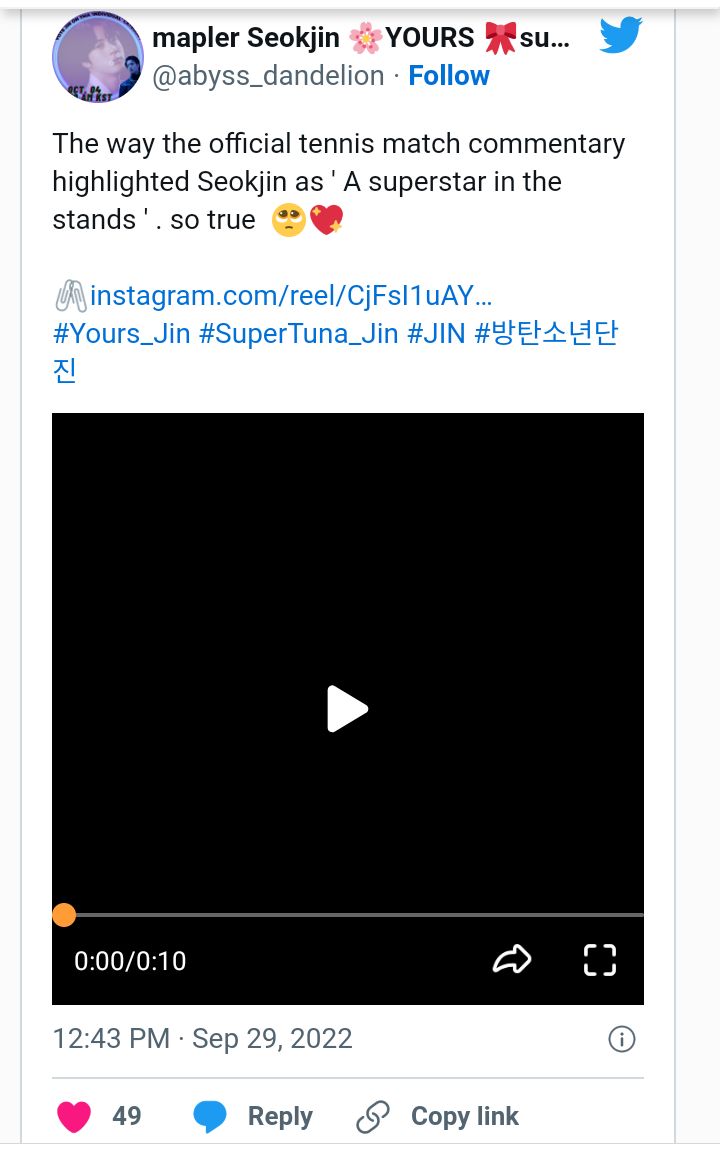 Tennis fans were not expecting such a frenzy surrounding the Korea Open 2022 that Jin’s appearance sparked. One media outlet even quoted a fan as saying that the artist promoted the event more than the ATP Tour. Articles about Jin trended on all Korean sports media websites. 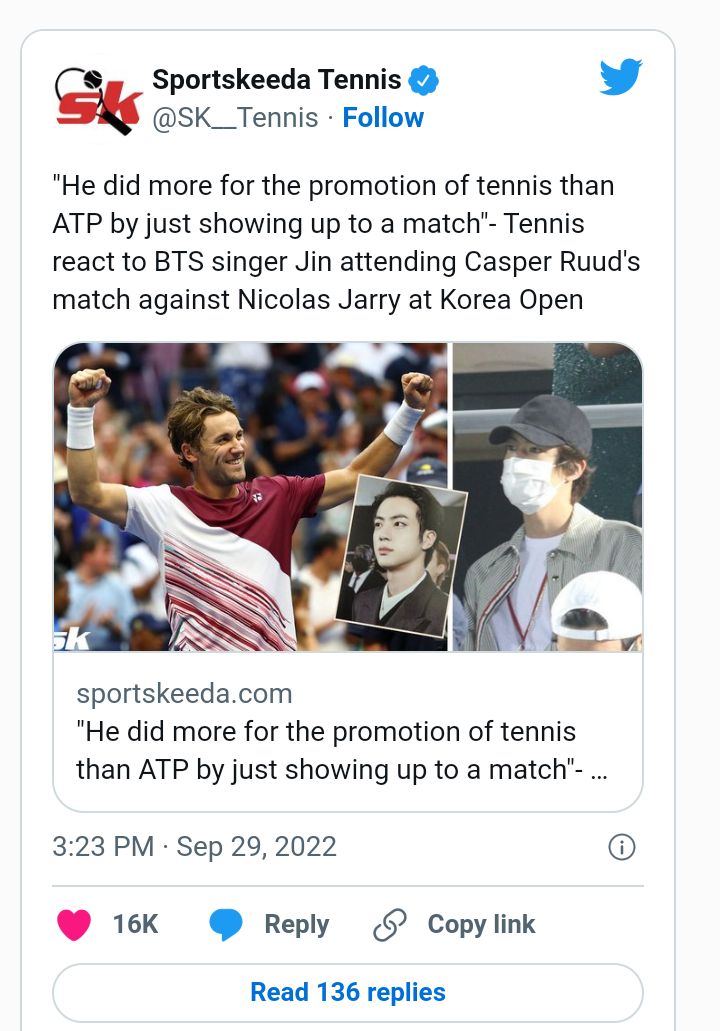 Tennis is currently popular in South Korea, according to the article. It provides a detailed look at ticket sales for semi-finals and finals in South Korea over the last two decades. It also explains why tennis has become more popular among the younger generation, following in the footsteps of golf, which has long been a popular weekend activity for millions of Koreans. As more people become interested in this sport, the number of indoor tennis courts is rapidly increasing. 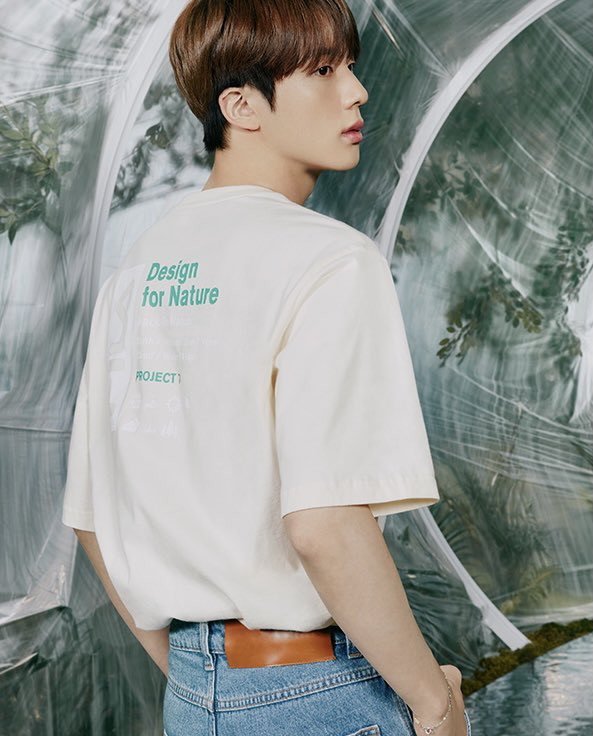 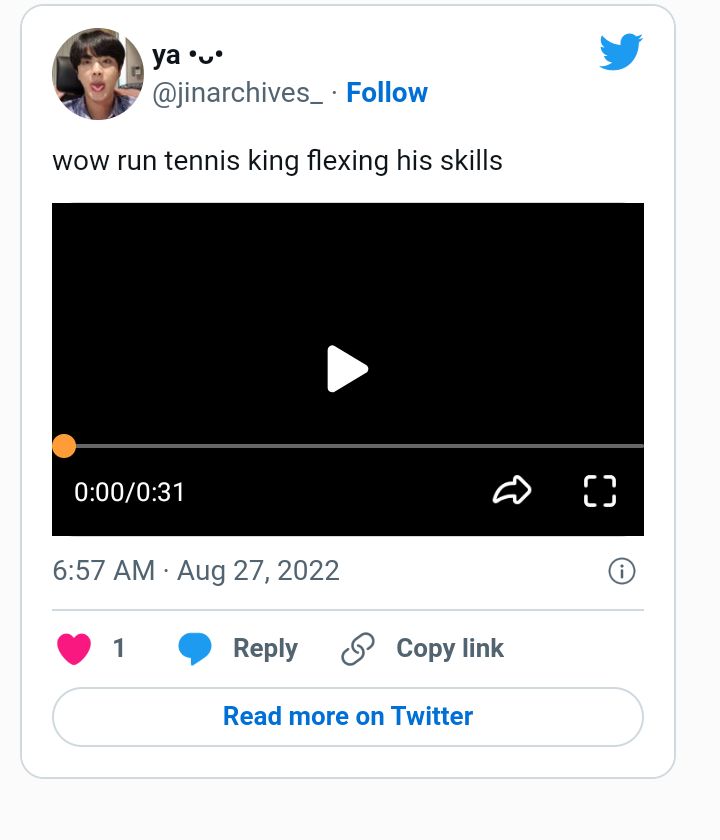 The article devotes an entire paragraph to the uproar Jin caused during the most recent Korea Open 2022 match between Casper Ruud and Nicolas Jarry. It reads:

“On the 29th of last month, Jin (real name Kim Seokjin) of BTS, a worldwide popular singer, watched the round of 16 match between Casper Ruud and Nicolas Jarry (111th, Chile), and it quickly became a hot topic. “I am thrilled as a tennis player that Jin likes tennis,” Ruud said after winning the match. Because of the high level of interest, sports brands such as FILA, Dunlop, and Le Coq, as well as various brands such as Lotte Chilsung Beverage, Goobne Chicken, Papa John’s, and Subway, sponsored the event.” 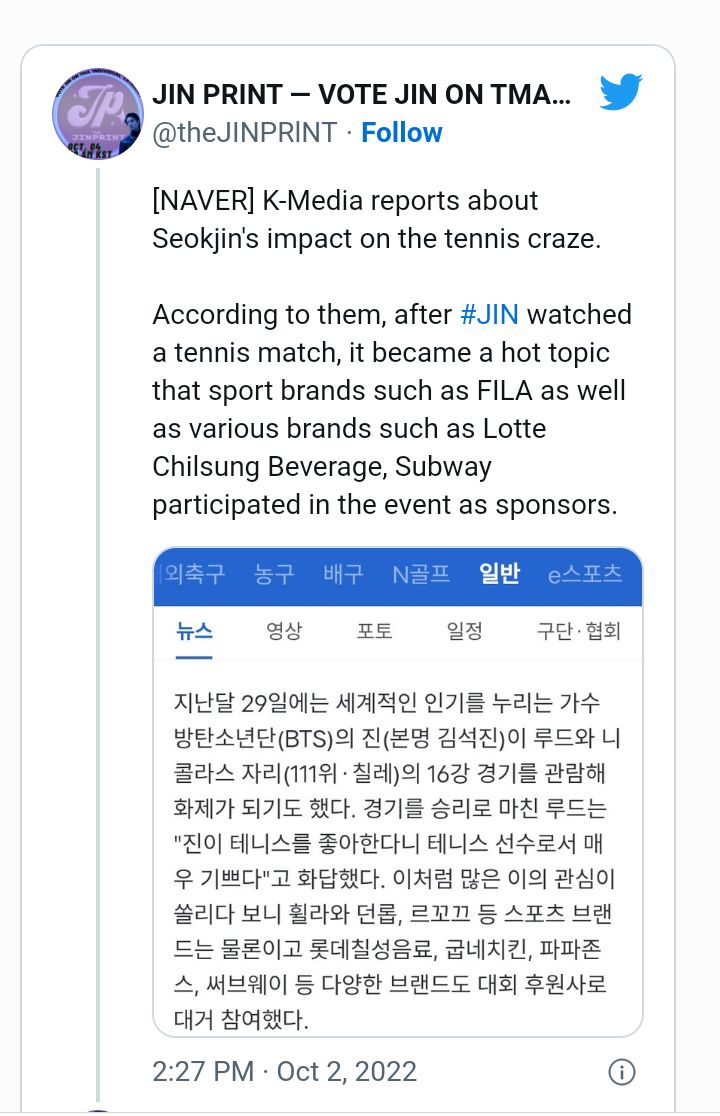 Jin’s popularity is truly incredible because he can draw so much attention to any sphere simply by attending an event!