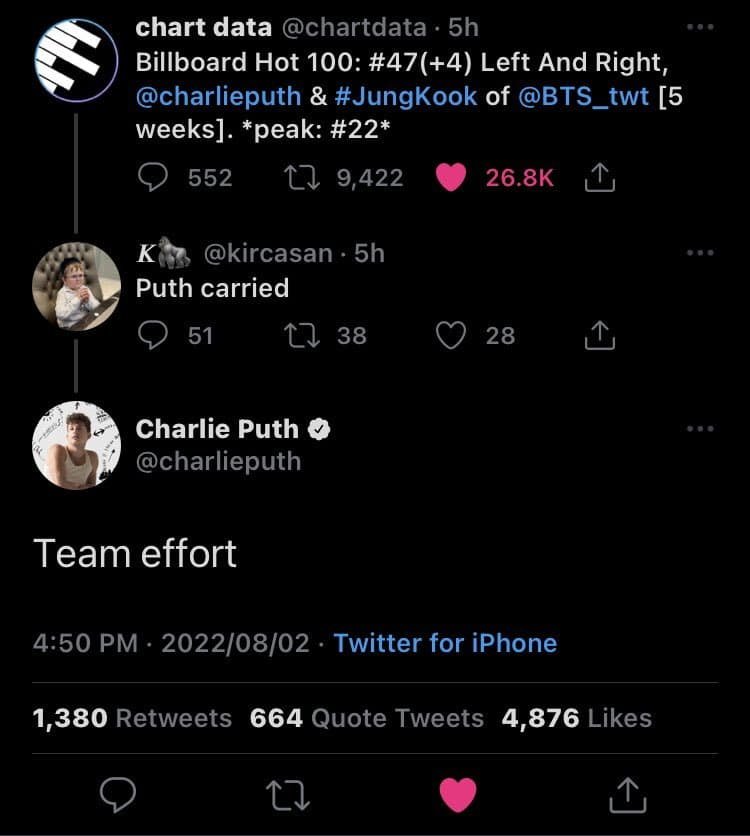 1. Chalpoo shows how much Jungkook cares.
2. Jungkook takes care of chalpu like this, but Jeongguk akgae posted a sales post yesterday as if it was Jungkook’s solo performance.

3. That’s what I say to Jungkook’s fans.. I act like Jungkook’s solo every day

4. Chalpoo really likes Jungkook hahaha From the past, just looking at the Don Talk Animore behind the scenes, Chalfoo likes Jungkook cute and likes him.

6. Foreign girls who listened to me for a long time are no different… It’s pathetic…

7. Because of Jungkook, the swimming performance increased 30 times and the solo song before Charlie didn’t make it to the Billboard, but this time, the collaboration song L’N’La was ranked 22nd. Jungkook’s virtue is right

8. Our Chalpoo likes Jungkook, so why are they holding their hair? Do the soldiers understand the interview? open heart

9. It’s been a long time since he’s finished, so it’s so pathetic that he’s trying to use it as a stepping stone for his comeback..

10. When Charlie Puth came out with the song himself, Jungkook also said that he would make the highest south korean male debut through this song, but he told me not to clench his fists and call it Jungkook’s performance lol