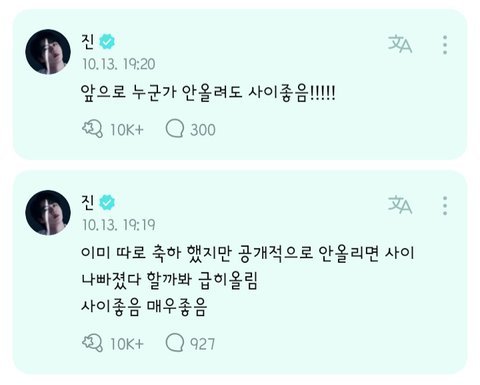 “I’ve already congratulated him separately but I was scared that there might be people thinking we’re in bad terms if I didn’t do it publicly, so I released something quickly. Our relationship is good, super good”

“Even in the future, if someone doesn’t release something, our relationship is still good!”

1. I really like the fact that Jin says everything he has to say. The fandom said he didn’t congratulate him

2. These days, BTS seems to practice silence is gold rather than people in politics who have to be careful about their words and actions. Meanwhile, Jin is pleasantly honest and looks good

3. I think it’s better to live with something to say

4. Jin’s personality is so attractive

6. I seriously love BTS so much because of this But that’s right, whether they do it publicly or not, they’ve probably already congratulated each other when they met. They’ve been together for over 10 years and the fact that people are still suspicious about their relationship is legendary

7. Freaking refreshing
8. If you’re an Army, you would all know that they don’t need to speak on it to know that they’re all close. It’s just the kids who are looking at them from the surface who are swearing. It’s not for nothing that people call them the fried vegetable boys, and the people who are talking about discord are just funny. Why would you talk about someone else’s house’s kids having discord with each other and spend that time swearing on them? Do take care of your real friends instead.
9. Only ajumma akgaes would be the ones fucking making things up about Jin and Jimin’s discord I wonder what they’ll say once they saw this
10. I know exactly who are the ones bullshitting