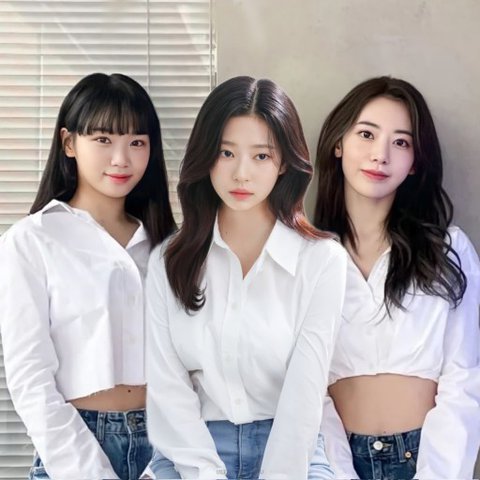 If Kim Minju was the center for Fearless, it would’ve been so crazy.. It’s such a freaking shame. I feel like she’ll go to the actress route but no matter how I see it, she fits being idol like a glove ㅜㅜ She fits Le Sserafim’s group color freaking well and she would’ve been included in the lineup for the 4th gen visuals. What a pity

1. Le Sserafim’s kids’ ambitions are no joke so she’ll be the only one who doesn’t look as passionate and will stick out too much

2. Minju has almost no dancing skills so she she really worked hard to go on every stage. It felt like she really had a hard time. She was a stiff member but nobody found fault in her dancing as a group and she was popular so she practiced to make up for it… Just support whatever she wants to do in the future
3. If you look at Le Sserafim’s dance now, if you just put a decent amount of effort, you’d have a hard time. Especially with how fast they are coming back, it would be even more difficult. I think Kim Minju chose the best decision for her future
4. It seems like it but she has no talent and she must be in the best position to know it. If you have no skills, you need to make it up with effort but if you have no passion, it would be hard and troublesome
5. But Kim Minju’s dance lines were pretty. I personally liked her dance lines the best after Lee Chaeyeon. Her stiffness wasn’t the issue but how slow she was at learning dances. What I find sad is that if they increased the amount of practice, she would’ve become a faster learner… Also, if she gained more confidence on stage, her skills will increase. At first, her skills have never been the issue. It’s just that Eunbi, Yena, Wonyoung, etc. were very expressive so her expressions looked lacking in comparison..

6. As it is a group that is mostly rookie and active in Japan, the limitations are clear, and I did not want it to last long anyway.

7. The faces match well, but the group identity in terms of singing and dancing doesn’t seem to match..

8. Kim Min-ju I’ve been imagining fearless, but it seems crazy… But it doesn’t suit the new song.

9. She’s pretty, but she doesn’t seem to fit in with Le Seraphim. There should be..