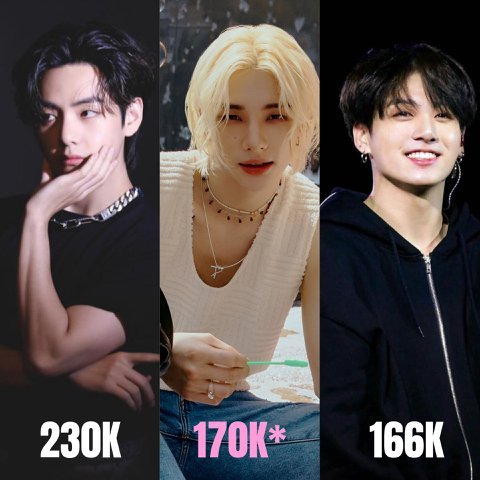 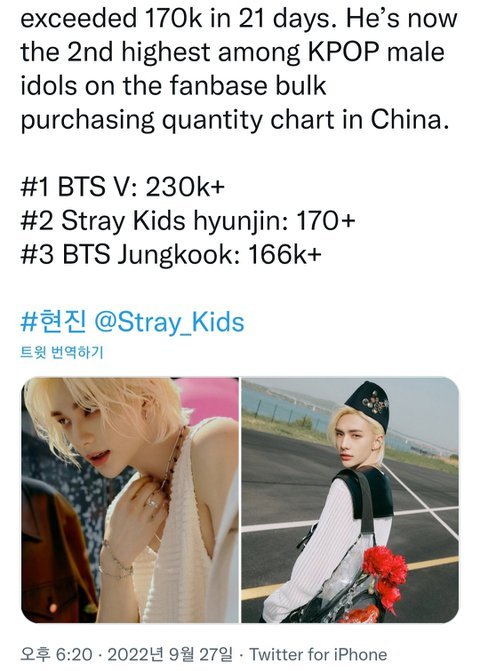 It’s been years since BTS were lined up one after the other in terms of bulk buying groups But this is the first time that SKZ Hyunjin broke the ranking, even though he wasn’t able to surpass V who is still #1 I always thought that JYP was weak in China, this is unexpected

1. Even if there is a lot of difference, it is said that it is next to BTS, and even the fans do not think that it will surpass BTS.

2. SKZ keeps saying it’s next to bulletproof bulletproof, and it keeps getting unflattered whether it’s Jewop or SKZ fans, but BTS>BLACKPINK>SKIZ & other K-pop idols

4. Hyunjin’s fancam is also next to BTS (I don’t argue because BTS is overkill) I know there are close to 20 over a million female idols are pretty and popular.

5. No, but looking at the way the author speaks, I can see that he wrote to insult Hyunjin, but it’s a pity that other fans get hit.

6. People are now prohibited from bulkbuying BTS albums because of the issue they ran with the government, they’re not even comparable

7. School-violence-dol screw off
8. BTS’ fanclub in China has been blocked, so the fans are all weary of the CCP. They’ve stopped builk buying. Seeing how you’re trying to praise SKZ by mixing them with BTS is so low

9. It’s been 3 years since they stopped bulkbuying BTS so it 2019? Chinese government is trying to end BTS so the Chinese Army are unable to builbuying for some years already, are they using BTS to mediaplay?