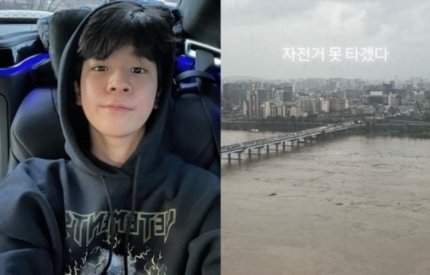 Singer Dongwon Jeong took a photo of the Han River, which grew due to heavy rain at his home with a view of the Han River, and shared it and wrote, “I can’t ride a bicycle.”
On the 9th, Jeong Dong-won posted a picture of the Han River in which the promenade was submerged in his Instagram story and left like this. Judging from the shooting angle and location, it is estimated that the photo was taken at the Han River View house, which was published on his YouTube on the 7th of last month. 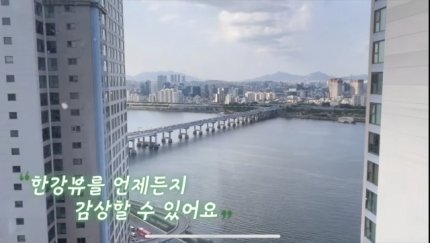 The post received attention from netizens when it came up in a situation where record heavy rain fell in Seoul on the 8th, starting with 300mm of rain on the 8th. The reason is that the statement that you can’t ride a bicycle in a situation where there are casualties and flooding of subways and roads in Seoul was rather light.
Some netizens reacted negatively, saying, “It’s raining and people are dying, so bicycles are a problem“ and “I’m still a child, but I’m not really interested in world affairs.” On the other hand, there were voices saying, “It’s public but still underage,” and “It’s hard to be proud at that age.”
The post that was posted as an Instagram story has now disappeared. Jeong Dong-won, who made his name as Mr. Trot on TV Chosun, was born in 2007 and is 16 years old this year.

1. That’s a stupid thing for kids to do. Would you post this

2. Did the little guy act like he drank water from the broadcast???

3. Thinking at the level of middle schooling, I can’t seem to help it

4. I became a celebrity at a young age and wanted to earn money, so I lived in the countryside and bought an expensive apartment by the Han River

5. Even if you were young, if you could see the Han River view with the support of the people, you should be aware

6. Even a famous singer should be criticized for posting in a newspaper that a teenage student said that he could not ride a bicycle because it rained a lot in the Han River. There is also a person called the chief.

8. Dongwon-ah, let’s be a little more careful with our words for this day. you are a public figure Since it’s middle school, let’s say we were able to do that this time.

9. This is what happens when uneducated poor people suddenly have money.

10. And all idol celebrities are in their teens, but there are a lot of middle school students and they don’t do that.. Adults who pretend they don’t know because they’re still children look pathetic. One thing to point out is that you have to point out to mature and develop.. Even though your job is a public figure, it doesn’t mean that you don’t take into account the social situation and say everything you say because you’re young.. Countless teenage child actors and idol singers are careful with their words and actions.